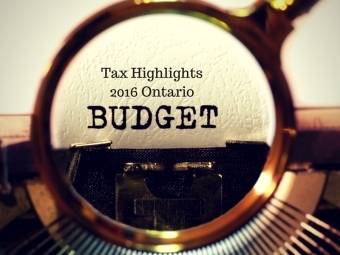 The proposal shows government investment in building a strong and health economy by investing in skilled workforce, advancements in innovative manufacturing and clean technology, enhancements to infrastructure, and strategies for developed for improving health care and support services needed for the growth of a fair society.


Tax related measures outlined in the 2016 Ontario Budget are included below:

Ontario Research and Development Tax Credit (ORDTC) to be reduced from 4.5% to 3.5%. Rate of the Ontario Innovation Tax Credit to be reduced from 10% to 8% for eligible research and development (R&D) expenditures incurred in taxation years that end on or after June 1, 2016.  Revenue to be reinvested in manufacturing, college based innovation projects, and research.  Tax rate reductions will be prorated for taxation years overlapping June 1, 2016.

Ontario will parallel the federal 2015 budget tax changes that include reductions in the federal small business corporate income tax rate over four years.  Non-Eligible dividend tax credit rate will be lowered from 4.5 per cent for 2015 to 4.2864 per cent in 2016.

In the recent budget, the Ontario government states that it is committed to this program.  The program is under review and announcement to changes will be made in 2016. Download details about the Apprenticeship Training Tax Credit Program

Ontario introduced legislation on February 24, 2016 to implement its cap and trade program to reduce greenhouse gas emissions. The budget includes details of the program, which will take effect on January 1, 2017.

Ontario’s cap and trade program would place a cap on greenhouse gas (GHG) emissions. The Province will distribute carbon tax credit allowances; certain amount free-of-charge & others to be available for auction. Under these new regulations, businesses that have carbon emissions would have to hold allowance for every tonne of greenhouse gas emissions they put into the air.  As the cap declines each year, to be compliant, they would have to reduce their emissions or purchase carbon tax credits.  Revenue generated will be reinvested to help reduce overall GHG emissions.

As of February 25, Ontario tobacco tax will increase from 13.975 cents to 15.475 cents per cigarette and per gram of tobacco products other than cigars.

Effective June 2016, there is a proposed increase of 2% that the LCBO would put on ad valorem mark-up for wine.  Further increased by 2% April 2017, and April 2019 respectively.

Farmers have noted that current property tax increases are working against them when trying to expand and diversify their operations. The Province will be working with the farming community and municipal sector to provide sustainable property tax treatment to farmers that engage in small-scale, value-added activities as part of their farming business, while maintaining a level playing field for large processors.

The government is working towards a pension regulatory landscape to encourage offer flexible retirement options, and ensure pension plans continue to be a viable retirement savings tool in different economic conditions.  An overview of recent government decisions on the proposed plan design of the Ontario Retirement Pension Plan (ORPP).

Employer verification and enrolment process for the ORPP will begin in 2017, with collection of contributions by both employers and employees beginning in 2018. The budget includes an updated timeline for the phase-in of employer contribution rates; starting with medium and large businesses, and then everyone phased in by 2021. Employee contribution rates will match the rates for employers. The contribution rate applies to pensionable earnings up to a maximum amount of $90,000.

More about the 2016 Ontario Budget - www.fin.gov.on.ca/en/budget/ontariobudgets/2016

Support for people who are sick, quarantined, or in directed self-isolation.

Enter your email address below to receive our newsletter.

Bookkeeping, Accounting & Tax Services You Can Count On.

Give us a call today to see how we can maximize business bookkeeping efficiencies and minimize personal and business tax risk.